Secondly, I’m still in shock surprise after walking into my gym Monday. The long overdue facelift’s begun! First up is the floors, so all the equipment’s been moved to one side of the gym. I had a lovely big space to play in for 2 days before the work started. To keep the dust and disturbance as minimal as possible the work areas are being walled off which doesn’t leave much jumping space so I’m having to get creative adapting workouts!

The past few days I’ve also been tweaking my schedule. After last weekend of just wanting to read, watch tv and staring into space which should have been recharging was the opposite. Monday morning I was playing catch up of jobs I should have done at the weekend. It wasn’t even relaxing, reading, staring into space, watching TV at the time. The whole time there was this nagging feeling of get up off your lazy bones and be productive! There’s nothing I hate worse than that nagging feeling of get up and do something and you just sit there in a couch potato state!

I’m hoping the tweaks will give me more time to blog more regularly, get up earlier and bed a little earlier. At present the getting up a little earlier’s working. Always with me, same old, same old. Always saying schedule needs an overhaul. Little tweaks I’m hoping will help me see what works and doesn’t, but seriously it needs a big shock to clear the system and start again!

Anyways, weekend recap on a Thursday? Why not and throw in what else I’ve up to while I’ve been trying to de lazy my lazy bones.

Remember when you were a kid standing there while you’re mum/dad zipped your coat up? That’s how I felt Friday. Cycling into the centre after my physio appointment my coat zip started to unzip from the bottom. It happened before a few weeks ago and I was able to fix it. This time, I couldn’t. I made it worse. I thought if I unzip it all the way to the top it’ll slide off. Nope! Jammed. I couldn’t think of a tailor in the centre that could help. Out of desperation I headed to the only haberdashery shop I know of in the centre.

That’s how I came to be standing like a kid as you got your coat zipped up. Thankfully they could help me. It took 2 people to shimmy off the slider before one of them whisked it away to replace it. I probably said thank you way too many times, as I was concerned how I was going to take the coat off without damaging it. The coat done up completely’s chin height. No way can I squeeze my head through it! I had visions of the weekend sans a coat. Total cost €4.50 to replace the slider! I mentioned that I didn’t know where else to go as I couldn’t think of a tailor close by. I think they said in the centre there aren’t any and they wouldn’t have been able to help me anyway as they deal with fabric only, not replacing sliders. Gamble paid off!

Saturday, the usual, workout, bike ride spying zoo escapees in Parc de La Ciutadella, too much time spent on my phone down an internet rabbit hole.

Sunday, I felt like I cheated on my usual long Sunday runs. I opted for 10km and monkey bars. I thought I could make the zoo, but missed the gates by seconds. I got back earlier, but again lost in an internet rabbit hole and night nap (aka, crash for 3 hours plus). I did finish one book, so that was productive! Seriously I don’t know where time goes. Part of the schedule tweaks are to be more productive. It seems like everything around you wants you attention. Everything is competing to be brighter, catch your eye, an head line that intrigues you and before you know it, you’re like, okay, did I really need to spend 10 minutes reading about an electoral race in a country I don’t even live in? The biggest challenge is walking away from internet rabbit holes. The last few weeks I haven’t been posting or looking at Instagram much. Some days I enjoy it, other days, especially now they have adverts or sponsored posts disguised as normal posts, it’s a chore. It’s like being popular in high school. It was great before the adverts. Plus it’s a game I don’t understand. Related but not related, the people that programme, design etc obviously have knowhow or figuration of know how (maths, how things work) has been hardwired for years, so what did people with that knowhow did before say 200 years ago?!

Monday, catch up, Tuesday, help from AJ while shooting a future post and getting excited over new leggings in the post. My beloved Fabletics after a few months wear are getting sagging bum second wear with the waist bands ever creeping higher and higher. They get a lot of use, so they’ve been cost effective. The Tone It Up crops (yellow and blue waistband) have surprised me. I’ll admit I get caught up in the Tone It Up hype, with past tank tops from them, for me have been disappointing. I wasn’t expecting much from their leggings, but these ones I forgot I had on!

Barcelona has 3 types of winter. Cold and sunny, sunny and warm, windy. Cycling back last night from the centre along the beaches the wind and I had issues. Running earlier it was a tail wind coming back. Cycling into the centre I was really looking forward to that tail wind coming back despite a voice saying fat chance. I dunno wether it was because I was tired, bag weighed down with coconut water and kombucha it was so strong I ended up doing the the unthinkable. Getting off and pushing my bike for a few 100 metres. Bloody wind. 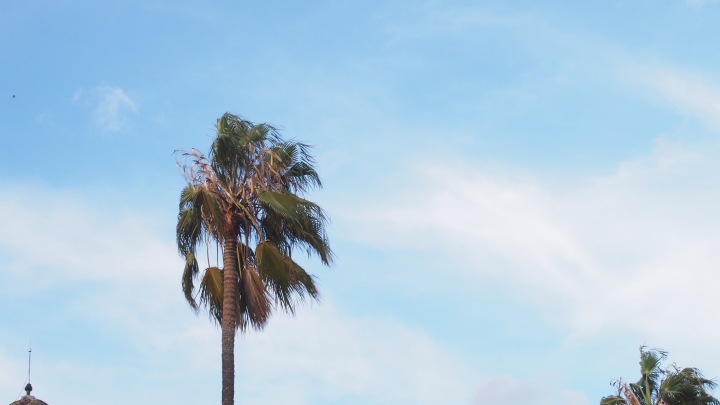 And I finished season 3 of Luther. I had a little ping of Britishness over the last shot over as it rose over the Thames. Not homesick, just a smile saying I lived there! And as a reminder I did, today the weather’s gone British. Drizzly, grey, overcast, can only tell the time by looking at your watch.

Favourite TV detective? I’m looking forward to Luther series 4 on Netflix. One thing the British excel are dark police dramas! Do you get caught up in internet rabbit holes and think did I really need to fill my mind with the crap?