Thanks to P being here and his cooking (thank ya) it’s been easier to bust this cold. If he wasn’t I’m sure it would have got a lot worse quicker before it got better. It’s still hanging around play havoc with my skin, making it feel dry. I’ve been drinking as much water and fluids, slapping on lotions and potions as I can but I can’t shift the dry feeling. Around my eyes feels like a desert and my eyelids. Currently like a puffer fish. There’s a reason why BB cream, concealer and face yoga were invented!

I hope you had a great weekend! In between trying not to feel sorry for myself for the power of being positive shifts it quicker (last time mentioning a cold) it was tackling some of that do list weekend. It’s also the reason why I didn’t take many photos the past few days, hence photo no overload.

Back tracking a little to Thursday, leaving the gym I very quickly discovered as in the first meter my front tyre was flat (it was dark which is why I didn’t notice it before riding off). 2 punctures in 2 weeks! Thankfully it wasn’t raining or too cold walking back pushing my bike about 7km. After 5km I ended up riding it. It was getting late, I still needed to go grocery shopping, my legs from my workout and run previously day were asking for a rest and I just wanted to get back to snuggle up the cats and hot water bottles. While I can change a bike tyre it’s easier if someone else does. P fixed it the Friday (thank ya!) so I didn’t have to take it to a taller to get fixed.

Last time mentioning a cold! My way of dealing with them is the get active which is where that saying if it’s above the neck it’s fine to workout, below the neck, skip it, not that I pay much attention to that. I thought my run would be a walk run, however I walked no more than I do in the summer. Plus I knew being by the sea along the shoreline would make me feel better. Which it did. After bike ride later, we headed to La Maquinista mall. Shopping makes you feel better! So many things to look at takes your mind off feeling crap (last time mentioning it!). The power of distraction!

Saturday, I was up early however the day somehow disappeared in a an internet hunt as I’m after a new purse/pouch (coin purse for any Americans). I’m not asking much from one; one that’s not leather, can hold my phone, cards, change, lip balms (yes plural in case I should loose one), hand sanitiser and hold it’s shape. I’ve tried wallets, they’re too organised and can’t fit anything more than 2 cards. I managed to find one on ASOS and somehow the basket grew a little in the process. A home workout later (Beach Babe 4.) it was another bike ride for some much needed fresh air after being cooped up looking at a computer screen nearly all day.

Feeling much better Sunday, I oped out my usual long run for a long bike ride the coast. P joined me and as always when there’s an empty kids playground with no kids around we played on the climbing frames. I don’t think I’ll ever tire of swings!

Kids playground to the right. No photos as we forgot to take any!

We made it back too late to get showered and ready in time to make the zoo so I ended up repotting all my plants. Ever since I stocked up on compost (I can never remember it’s English name. It’s always tierra to me) in the Spring I’ve been meaning to repot them. I knew it would take a few hours and to finally get it done lifted a lot of my mind and to do list. For weeks everytime I’ve been on the balcony, it’s been bugging me to do it. As well as repotting all of them, I also managed to sort out all the other crap that had built up there. I’m still decluttering KonMari style (it’s taking way longer than 6 months. Nearly a year. Summer months I want to be outside not inside sorting out!) however to finally get it done put some good energy back to the balcony.

A small selection in the background. The only place for the duvet so I remember to wash it is currently the balcony. Please don’t judge! 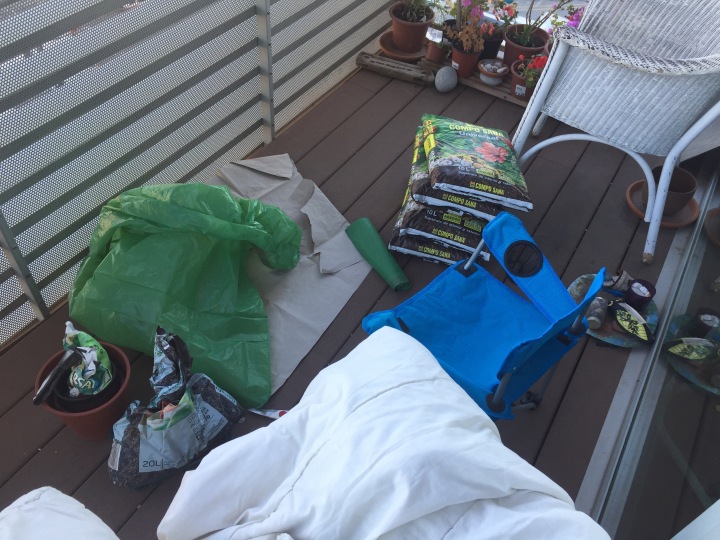 How do you bust colds. Staying in bed or get up and active? Have a great week!