Early start Thursday to beat the 10am supermarket rush hour so I needed my coffee and some oat cookies! I also got to see this beautiful pink sunrise. 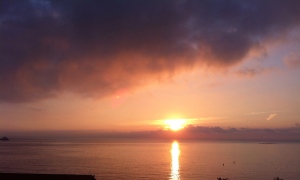 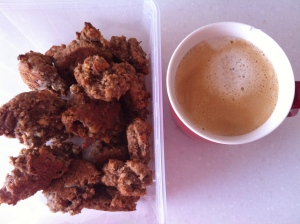 We didn’t beat the rush hour! My boyfriend (Paul or P) had to wait for the boats car to be available so we hit busy time. The fresh food isles were packed full of people pushing and shoving. It’s each unto your own in France!

My breakfast turned into brunch and afterwards I called my Mum to catch up. My nephew who’s just started university has surprised all of us on the domestic front and is even taking packed lunches in!

I squeezed in a 10km bike ride and got a puncture on the way back. Great. I would normally sort it out, but it’s quicker for P to change it than me. One of the last times I fixed a flat, a repair spoon popped out, flew over balcony into the bushes as I was easing the tyre off! 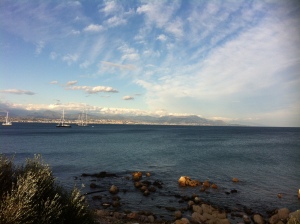 The minstrel or windy season has started. It’s eerie seeing waves heading back out to sea. 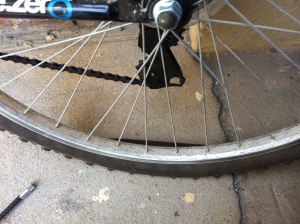 P had an osteopath appointment Wednesday and asked exactly what happened with my ankle. Basically I was off balance, left side twisted forward, which was compensating for my right side. The left side had enough and pop. He added I’m not one to rest which made treatment a little longer as less active person would have required two visits. As I’m active and it’s built up over a long period of time, treatment is taking longer as the body needs to undo and repair quite while of being out of alignment. Maybe I didn’t ask the right questions initially to understand, but It wasn’t explained to me clearly. Now that I know, it all fits into place. It could have been wearing a rucksack on the right shoulder when I was younger (it wasn’t cool to wear it on both shoulders back then), heavy handbags on that side and the final straw was the right ankle being injured earlier this year. Anyways, now I know. The insoles will help balance me more. Maybe the osteopath and podiatrist thought I know this, but sometimes you need it spelled out.

My energy levels and strength are getting back to normal. We went for a 4km run, which ended up being 5km. I found that if I lifted my foot more, the ankle felt better and after 4km in any issues disappeared. The pace was a pre injury slow pace. Big smiles afterwards for my first proper run in 6 weeks. 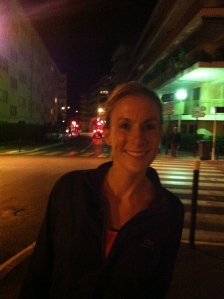 I put in a request for sweet potato and chia seeds patties for dinner and wasn’t disappointed! .

P’s Captain had given the crew Friday off, so we got to attack the house a bit, sorting it out. Always a good feeling. I had a great workout at about 80-85% normal effort. I added a little cardio with shuffle touchdowns for 30 second bursts (working around no plyometrics for cardio hits) and reduced rest times between sets. I still have to remind myself not to go all out! 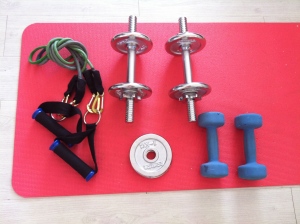 We had planned to go to storage to it sort out, but after being in the house all day we went for some fresh air in the park. In the summer around the time we went it was packed with runners. Today just a two! 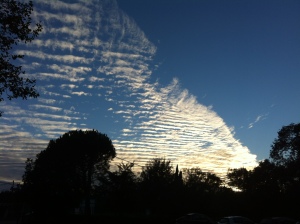 I’m easing back in to yoga and had a good 10 minute flow. None of my favourite pigeon poses just yet and basic crow I had no problems with. That made me happy that I haven’t lost much strength.

I recieved news on my Personal Training Certificate direct from the course certification body. It was sent to my course provider in August. Good news it’s been issued. Not so good news, where it’s been for 2 months?

What’s your early morning fuel? We’re playing tourists this weekend. What ever your plans are this weekend, I hope it’s a good one!