I’m secretly welcoming the cooler weather coming next week. As much as I like summer’s reprisal, I’ll be happy that it’s finally jeans weather. The temp’s gone up recently, but it’s just this side of a little chilly for shorts after mid afternoon and just that bit too warm for jeans. I could wear a skirt, but I don’t possess one. Seriously I don’t! I can’t remember the last time I wore one or a dress. Dresses I have, but hardly wear. When I do, I don’t feel like me. Jeans, leggings and shorts are so much easier to cycle in, run errands, dress up and dress down, with out worries if my skirt’s tucked in my knickers (I always let a girl know if this happens to her. I’d be mortified if it happened to me!) or if the wind blows. It’s Monday, I’m tired.

Saturday was taken up with studying and cushion cover hunting, but not before a HIIT workout and burpees for breakfast. Side plank burpees to be exact. They’re just like regular burpees, but instead of a plank behind, land in a plank 45 degrees alternating left and right side each burpee. Studied out, I cycled into the centre and left a little later than I wanted (closing time 10pm!), had just enough energy for something to eat before crashing in front of my guilty pleasure, Keeping Up With The Kardashians. Can someone tell me how they do their eyes?

Early hours Sunday morning I was kept awake by a massive thunderstorm and wind whistling outside. The grey clouds were still around when I got up and cleared up by the time I set of for my run. I said I did 12km, NikePlus app said I did 2km. 12km or 2km it was a tired run. I hope I’m more rested for my 10k this Sunday. I set under 52 mins as a goal and if I’m as tired Sunday as yesterday, there’s no way I’ll run that! I’ve reinstalled the app and it’s still playing up.

The sun didn’t stick around for long. Mid afternoon, grey clouds returned. No beach today (I’m gonna miss my beach siestas), just studying and planning new workouts. I don’t have to cover all the gym instruction units thanks to previous studies, but instead of 6 weeks to complete the required units, I’ve actually only got 3 weeks as the theory study has to be completed 3 weeks before the exam. My mind’s gonna fry! 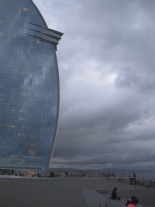 We cycled to the W hotel and I decided to snap a selfie in front the red W sing (I need sleep!) when this guy looking like Karl from Desperate Housewives comes up to me with a camera and cheekily asked if I’d like to earn €5. Whoa! ‘Who’s this crazy person’ crossed my mind, then a big group popped up behind him. A group of 15 Dutch tourists staying at the hotel, wanted their photo taken in front of red W before heading the airport. So there’s me with 3 cameras in hand, mine and two of theirs snapping them as they set up and then crazy smiles. I didn’t get €5, just lots of laughter!

And this girl needs sleep as it’s way past her bedtime. Until next time!

How do people ask you to take their photo? Do you let someone know if they’ve got toilet paper trailing behind them or skirt reveals? I remember letting girl know she had an Andrex Puppy worth stuck to her shoe. She was so mortified she didn’t even say thank you!