Waking up just before or with the sunrise and then coffee normally sets me up for the day. Water then coffee, but you get the idea, coffee. Then if I can while running around feeding very hungry cats, making coffee, waking up, watch the sun as it changes from pink to yellow. Everything feels energised yet relaxed at first light. 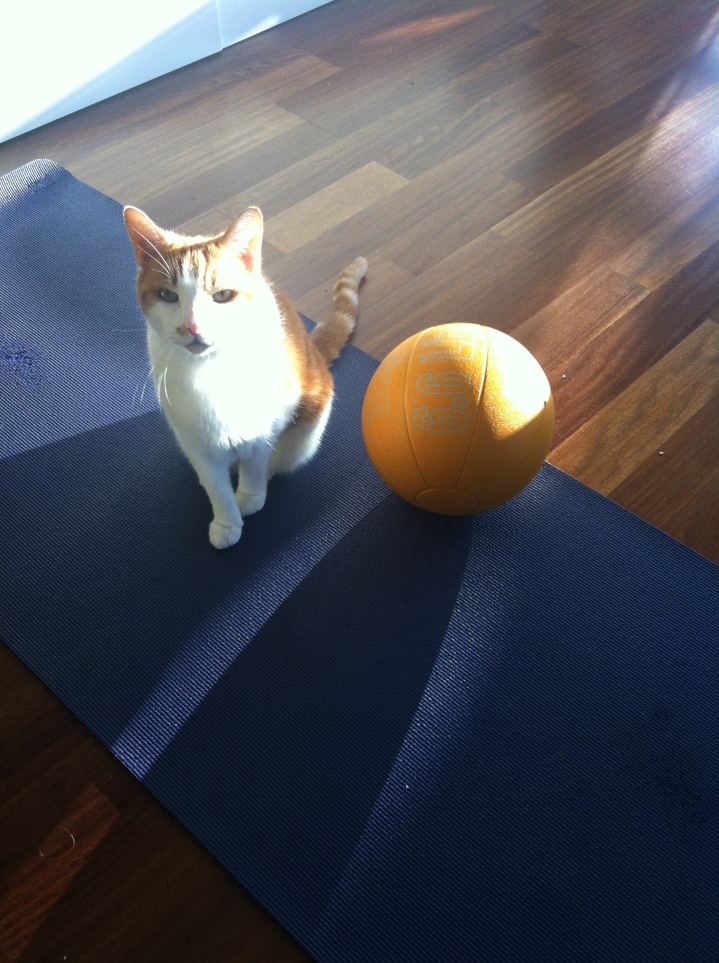 AJ and I are still debating whose mat it is. Last night he wouldn’t budge during yoga and this morning, staked his claim at warm up. When he did get off the mat, a great 25 minute workout with an 10 minute abs circuit afterwards. I find even if workouts are short, I actually workout for about an hour with setting up, warm up, abs, stretch, tidy up. My go to warm is JC Santana’s The Chopper:

3 sets of 10 with a 3kg medicine ball for each set: Vertical chops, rotational chop and diagonal chops left and right.

Works all the muscles and I tag on walking lunges x 20, a few rounds of cat/cow and 8-10 quick upward dog to downward dogs. Warm ups are essential to get the body ready for what’s coming and to prevent injury. I prefer total body warm ups because of how I train. The chopper covers if I’m more shoulders, back, hamstrings, plyometric, whatever’s down in the circuit that day.

Or that day in general. Saturday, felt like I cycled all over the city. As soon as my workout was done, I sprint cycled to my barrios main post office before it shut early. I had parcels to collect! I had to ask 3 people where it was, it was that hidden. I’m normally good at finding places, but this one, down a side street only in those in the know know where it is. Then cycle back with a rucksack and emergency fold up shopper bag (leopard print. Even if it’s an eco bag, it still has to be animal print) on the handle bars, filled with 3 parcels, (one wrapped up in cling film as one product had leaked in transit. i-herb have great customer service. Within 5 minutes of emailing, they issued a refund). Later we cycled to Maremagum shopping centre by Port Vell, Barceloneta and the Ciudad Vella to look around, a total of 20km cycling. One of my favourite views of the city is from this port. It’s a mix of old and modern. It’s one reason why I chose it as my barrio to run for next month’s 10km Corri Barri.

Cooler temps Sunday morning. A good thing as I decided to run 14km, first time in a few weeks. Easier than the last time but the last 2km had me questioning why 14, why not just 12km. Because I set 14km as the distance, I knew I could do it and get a guilt free beach siesta that afternoon as it’s the weekend. I did the 14km, said hello to the Anis monkey and half got the siesta. The clouds came early making it too chilly to sleep. Instead I relaxed reading half of August’s National Geographic which is an accomplishment as I don’t get to read often as I’d like. And, those clouds went on the be the biggest, most spectacular electrical storm I’ve ever seen. The whole bay was lit up yellow, purple from inky black for half and hour. There’s always a flip side. 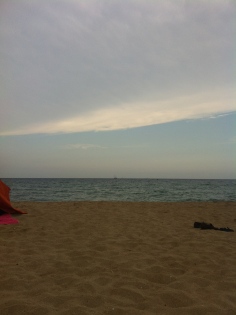 Are you sad it’s getting cooler or welcoming the cooler days? What’s your go to warm up?

Happy Autumn Fall Otoño!
See you next year summer 🥲
Last week I’ve never seen so many fish at once at my secret spot. Almost like they knew this weird looking pretend fish wasn’t going to visit for much longer as the nights draw in having a farewell party. Later that evening after running errands cycling back a guy was fishing where I snorkel. ‘Swim away fish, swim away!’ I shouted silently inside. Don’t fall for the snacks that appear from the sky!
Checking out the human. Saddled sea breams
Under the sea, Lloret de Mar. Salemas grazing on something fish tastebud tasty. Slowly saying a sad see ya later of visiting this world until next year when summer returns. Please stay summer ✨
Mānoa Falls Trail, Oahu, Hawaii. Finally sharing on the blog (link in profile) from pre covid travel Mānoa Falls hike up into the rainforest. Maybe out in the depths of forest are still triceratops and dilophosauruses.
Loading Comments...