Handstand practice has become a little ritual after my morning runs the last few weeks. Slowly I’ve been moving away from the wall, but never being able to hold one fully with out bouncing off the wall first. Messing around one afternoon on the beach a few weeks ago helped ease the fear of falling over as the landing’s soft (which I did. Many times!), but I still couldn’t hold one.

Last week, I decided to focus on the space in between my hands and suddenly I was able to hold one. The wall as there, but I didn’t need it, as my base was there. Just from switching perspective, I felt strong and stable. I can now hold them for 5 seconds before flying over. Still work in progress, I’d like not to kick into them. Baby steps! 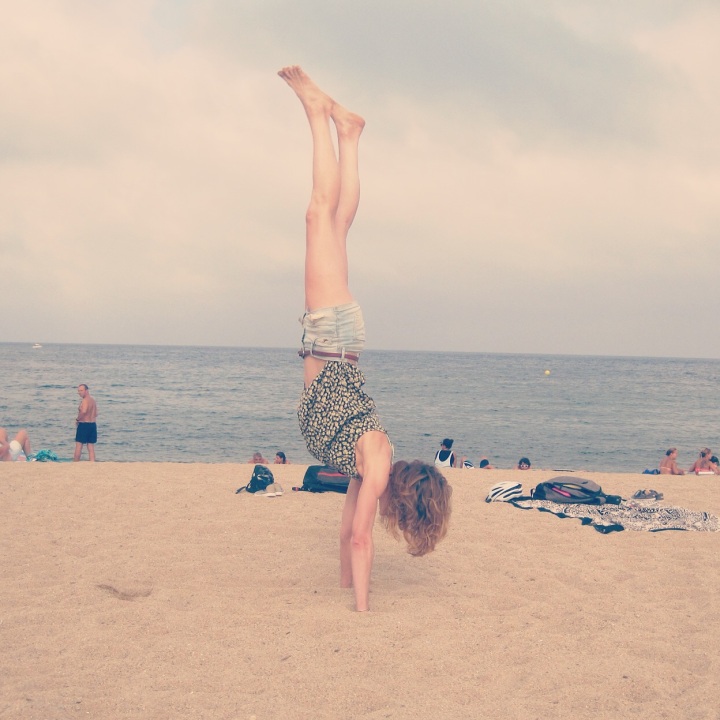 I think the weather heard me when I said it hasn’t been as hot this year as the past few mornings working out I seemed to have sweated more than anything else, even when it’s been overcast. I’m usually crashed out on the mat at the end! I’m not going to moan too much as in 6 weeks, summer’s officially over and I know come the winter, I’ll be wanting a hot day as I pull on my running gloves.

I should take that as my cue to join a gym. I’m putting it off as I like the convenience of working out at home. But if I want to make friends here then I need too. Plus I miss aerobic salsa, my legs would like heavier resistance and they have air conditioning!

I’ll leave you with this little guy. A big pile of ice to collapse into sounds perfect right now!

How do you deal with the heat in the summer working out? Water, water and time of day for me. Though I generally get the time of day wrong!