Spring in came in a big ball of pink over the sea. I read last week that the sun rises true east at the Spring Equinox. Being the little geek I can be sometimes, I was up extra early to see if this was true! I checked with both my handheld and iPhone compass and it was a few degrees out or maybe as it tracks in an arc, I was a few seconds late. Either way, it was a beautiful sunrise.

The piece of drift that I saw on my run yesterday is now standing tall on my balcony. I said to myself if it’s still there when I cycle past later (I really need to pick a different running or cycle route) I’ll bag it. Bag it I did, when no one was looking!

Paul messaged earlier saying he’d got out of watch as one of the deck hands didn’t want to go drinking with the others. He needed an excuse and being on watch is the perfect one. I didn’t know if he wanted to run or bike when he got back, so I held off my ride. In the end he ran. He’s fast and ran purposely fast so I wouldn’t overtake. That worked apart from the main roads. I won that section, yeah. The drift wood was still there (woo hoo) and home it went with me. I really wanted to race Paul back, however he won purely on the fact he was running and could dodge pedestrians easier than me on a bike. Next time!

I recently re found my mini bands and have been reincorporating them in my workouts. I usually cool off with an abs and floor leg circuit, with variations of planks, v-sits, Pilates and yoga moves. This morning I added them to Tone It Up style clams (knee to knee, heel to heel ) and they’re a keeper. Feel the burn baby!

While AJ snuggled up again next to his yellow blanket and D dreamed of corn on the cob, Paul and I felt like we had the whole of Cap3000 to ourself. I had a few items to return, so we popped by late afternoon. I couldn’t believe how quiet it was! No queues! I can’t remember the last time it was so quiet. Hassle free shopping at it’s best.

I’m hoping the mistral blows away the smog. The air was cleaner cycling and I could smell the surf. 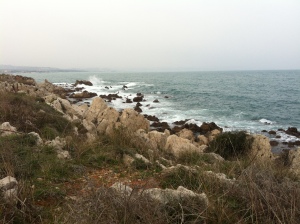 He really does love his yellow blankie. Complete Mamas boy. 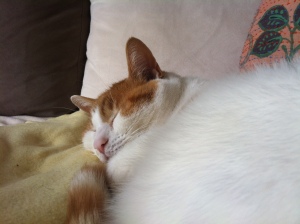 As sweet as this boy looks, he’ll stop at nothing to get his paws on sweetcorn. A few months ago we found out he goes crazy over corn on the cob. Tonight was no exception. If you’re not careful he’ll nick it off your plate, eat all of it and then come back for sweet potato! He really is one crazy cat.

Does anyone else have a cat that eats sweetcorn and sweet potato? Have you discovered new old things recently?