It’s been busy and kind of calm the past few days. Next week, not so much! We’ve got a whirlwind week of visiting family and keeping sane at the same time. No road trips this past weekend. Instead, a night with friends and catching up on sleep!

Gold stars to this boy on Thursday. He’s lost 500g in 6 months! I’m so proud of him. Ever since he became a house cat 8 years ago it’s been a battle with his weight. This year, we’ve somehow made it work. I’ve noticed a change in him the past few months as he’s more sociable and playful with his little bro.

This boy, doesn’t win any gold stars. He gained 100g in 6 months. The vet want’s AJ to drop 600g and D 700g to be their ideal weight. They haven’t been labelled as obese, just lazy. AJ, 11 is a big cat anyway and D, 9 has always been more active. The weight has to go as at their ages they could get diabetes. Not something any of us want.

To stimulate their hunting skills and get them more active, I place a small portion of their daily crunch around the apartment. We ordered from Amazon last week a puzzle feeder. Instant hit and prizes everytime! It’s not just humans who benefit from exercise and new stimuli to get fit again!

My workouts the past few days have been great. I’ve reintroduced bunny hops (love, love. love) and Blogilates Charslton lunges. Ankle and knee have been fine training, though Thursday’s workout I had to scale back slightly. I’m pushing 85-90% pre injury rate effort, though I feel it’ll take longer than I’m hoping to be 100%.

The longer evenings keep catching me out. Thursday’s bike ride was a little dark! It was great to see bats out.

Fridays run was one of those feel free ones. As much as I like running with my boyfriend for competition and a fast run, I do prefer running sola. It’s one of my few moments of feeling free! 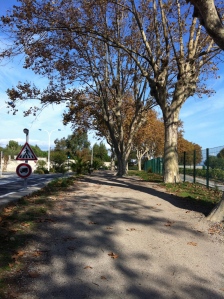 My cardio bursts in my workouts are paying off as my VO2 max running is improving. The pace and distance was the same as last Fridays and my lungs weren’t screaming. Just some knee and right adductor issues. I’m hoping these are temporary and in response to my body adjusting to new posture. Handstands afterwards and happy to report after 2 months, I’m where I left off with a little more grace!

There are around Antibes some considerate drunks as I found out running. France has done way with conventional rubbish bins and usually just have a bin liner. It’s good to know that alcohol doesn’t always cloud judgement!

Paul had the day off and went on a motorbike ride with his best mate around the top of Monaco and Eze. He came back happy! I cut it fine with the light cycling (yes, I have lights). 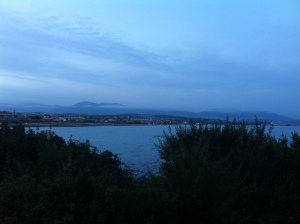 Though Friday was a public holiday in France, the shops were open. Unusual, but not surprising as Christmas is about 7 weeks away! We didn’t realise they’d close early, so had to run around Cap3000 mall! I picked up my friends birthday present and we went back Saturday afternoon to see if Apple sold a Mac’s with a QWERTY keyboard. They don’t!

I also had a good yoga flow Friday. Gradually easing back in. I still have to be careful with downward dogs.

Girly night Saturday with my two girls! Paul did the cooking (thank you!) and didn’t mind being surrounded by ladies for an evening! Aubergine chilli, Indian flat bread, veggie burgers and salad followed by passion fruit tapioca was on the menu. Aj gets very shy when people are around, but not with these two ladies. He loves the ladies! They sometimes look after the boys while we’re away and it was good to see AJ being himself around them. Both cats lapped up the attention!

Thank you for the beautiful flowers!

Sunday we had planned to go to San Remo, Italy but never heard the alarm. Instead a lazy day. I’m gradually working up to 10km runs and Sunday pushed for 6km. The left knee was fine, however the Achilles started to moan half way. I’m currently run the flattest route I can find, though some slight inclines can’t be avoided (and I don’t want to run in a bubble). Inclines usually bring on some sort of warning. The warnings aren’t as intense as previously and as predicted, when I hit the flat again, it went away. Just that right adductors playing up.

San Remo became Monaco, which became Nice promenade which became a walk around the Cap d’Antibes. A mistral was in full force and it’s not fun being on a bike when it’s super windy.

The Cap was quiet (6pm in the summer it’s full of runners, cyclists, walkers and cars). All the super rich houses have access from the road up with amazing gates and doors. In the day time they don’t seem as impressive as when they’re lit up at night. It all seems very James Bond!

After 6km we stopped off for yolo take way pizza. I’ve past the place so many times running and hardly ever walking. It’s always been packed and smelt good! We had a few slices watching the sea roll in!

How do you keep your pets fit and healthy? How are you finding the shorter days if you’re in the Northern Hemisphere?

6 thoughts on “Calm Before the Storm”