There is always a sparkle in the dark. Even if it’s a small spark, it’s there. Yesterday that was Pauls no bake granola bars with freeze dried mangos. Fancy! 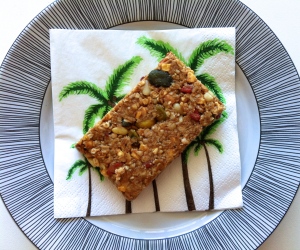 Yesterday was one of those days were you’ve been up since the crack of dawn and come midnight, you ask yourself, ‘what did I do today?!’

The landlord had a builder coming around early. I was up, dressed, had a so so workout (a bit rushed and stuck to tried and tested favourites) and was ready on time. An hour later (not unusual) I get 1 missed call, call back, no answer and an email later to say they tried to call several times to get in, but I wasn’t around. What’s wrong with pressing the buzzer? That works fine. It’s not the first time it’s happened (they usually don’t call) but what really got me mad, was that I was lied too. I maybe blonde, but I’m not stupid.

I empathised with the sea! 2km added to #100byVDay! 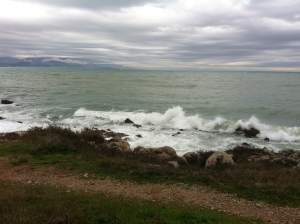 My afternoon class was rescheduled as the student was ill, so I had spare time on my hands. I was going to get my hair trimmed later in the week but decided to chance it if they had a space free. They did, thanks to the rain. No thanks to the rain, he was bored and got a little scissor happy. I guess it needed it and it should grow into it. Sticking a bike helmet afterwards, probably didn’t help either! I did speak up when the parting was in the wrong place. Why is it we just sit there and let them cut away when we’re not feeling the cut? Yes, they know their job, but you know your hair, you’re paying for it and you have to live with it. The customer is always right, right? We speak up in other areas, but hardly ever at the hairdressers! Is anyone else like this?

I caught up on household chores (whoopee!), supermarket swept with Paul and worked on summer bracelets. I find this time of year I’m wanting change. It’s too early for spring though there’s a glimmer of it. It’s also too early for dressing in bright colours, so I make up for it with bracelets. I like to mix and match, stack ’em high or keep it simple. 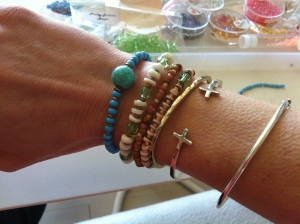 By the time I got to bed I was whacked. Yoga didn’t help ease the achy muscles or settle my mind as I had to be up early for the builders again. If only I was like the characters in Archer, I wouldn’t have a problem speaking up. Holy sh*t snacks! We watched it for the first time last night on Netflix and haven’t laughed so much at a TV show in ages!

As for those freeze dried mangos…Holy sh*t snacks…now that’s sparkle!

Do you find it hard to speak up, or have no problem expressing your views when you’re not happy, especially when you hair’s on the line?!