If you haven’t already watched National Geographic’s Cosmos on Netflix, I highly recommend it. It left me wishing I’d pursued science and geography after high school and although Neil deGrasse Tyson narrates and how it’s written is an easy to understand manner, it did leave me feeling kinda dumb. Or rather there are people out there looking into space, inventing, find answers to things I can only just grasp!

Cosmos follows up on the original Cosmo series back in 1980. I think I learnt more than I did at school on some things, but then science has come a long way even in a short few years. The ideas presented about how life may have developed on Earth blew my mind. Maybe it hitchhiked across the universe, maybe Earth wasn’t ready and when a meteorite hit, blew life back into Space only to crash land a couple of thousand years later. Astrophysics amazes me, that we have more atoms in our eyes than there are stars in the known universe. Everything is made up of atoms. Everything! That we’re constantly hit by cosmic rays. That people out there question everything while others are content to dream small. That we don’t actually touch things. It’s kinda like our atomic force field. That nobody knows what gravity actually is. That Earth is an amazing planet. The way it protects itself, the way the oceans absorb CO2, the way scientists have found how to measure CO2 levels from millions of years by rocks or forgive me if this is incorrect, a rock or animal that grows 1mm a year or something. That women in the UK little over century ago weren’t allowed to study science! That scienctists are trying to replicate on a grand scale photosynthesis, but can’t quite get it. That solar powered electricity was invented back in the late 1800’s but as fossil fuels were cheaper, they took off. That the initial sunrise is an illusion, photons take 20,000 years to to be released from the sun and 8 minutes 20 seconds to travel to Earth as light that we see, The moon is 2 light seconds away, that’s how long light travels from the moon to us. To question everything! Basically if you love Earth, Space, are an avid National Geographic reader like me, question things and like to know how things work I highly recommend you watch it! 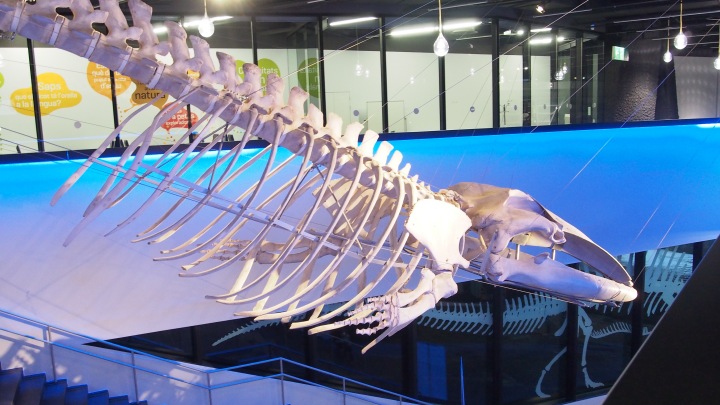 Wednesday was a festivo or holiday here. Thankfully it was a holiday as it chucked it down all afternoon and evening. Rain so heavy it stopped play. Rain you press your nose to the window and sigh as it’s too heavy to go out in. Too heavy to cycle in, too heavy for the motorbike and if you haven’t got a car, you’re kinda stuck. It was one of those save it for a rainy day day. While I was quite happy to stay in and take advantage of being in while it was ‘daylight’ to get computer work done, P wanted to go out. I remembered that the Museu Blau, Barcelona’s natural science museum was just down the road. It’s a place I’ve been wanting to go for a while however, as I always prefer to be outside rather than indoors, it’s always been a rainy day visit. As it was raining so hard, we decided to cash in the rainy day. 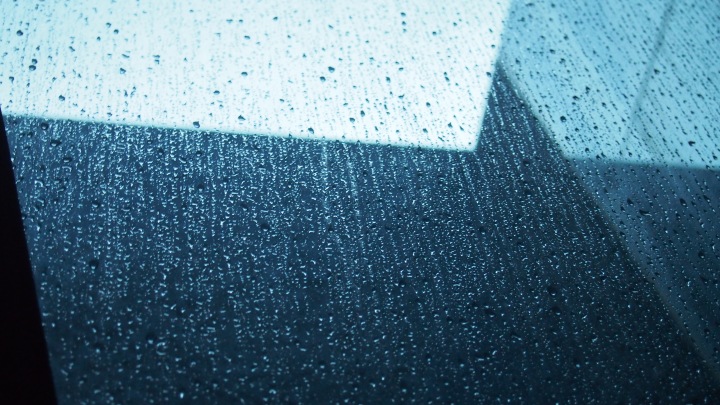 The museum building itself is amazing. It was designed to appear as if it’s floating. The museum itself is small, as the rest of the building’s held for events and conferences. Tickets are inexpensive starting at €6 with concessions available. We opted for the €7 ticket including entry to the Botanical Gardens (located across the city on Montjuic) valid until the end of the year. Due to time we choose not to pay the extra for the Spinosaurus Exhibition, which on the website looks kinda cool! Lockers are available. 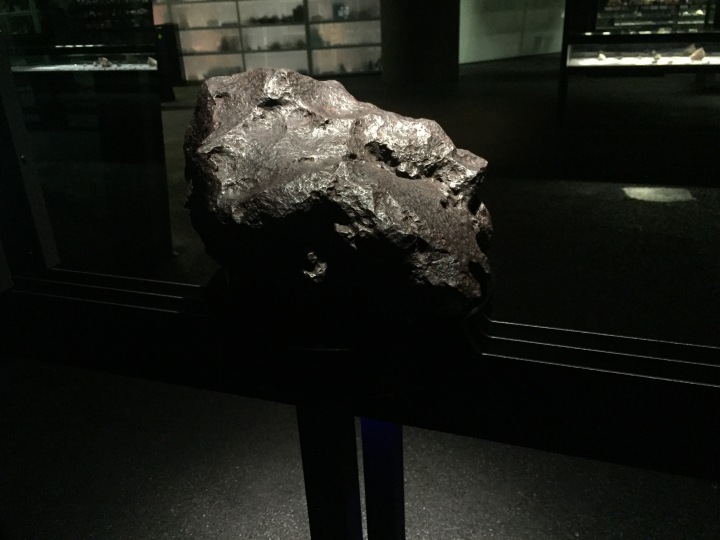 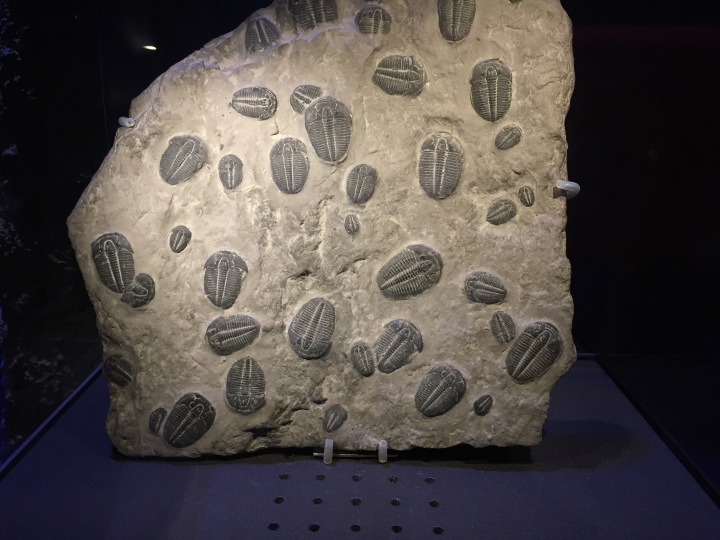 I’d literally finished Cosmos the night before and it was great to be able to tie in what I’ve learnt looking at fossils, rocks and plants. Even P was engrossed! It’s fairly small, you can get around it in 2 hours. We got there an 1.5 hours before closing with 2 hours being just enough to hold my attention. Displays are in Catalan, Spanish and English. Some are interactive, others if it’s uncovered you can touch it! The tour starts with a brief video about science before the exhibition starts. There’s a meteorite and volcanic bomb you can touch (it floated out in space! Not the volcanic bomb of course. But who knows maybe it was blasted out into the upper atmosphere.) before starting with the earliest rocks formed, leading through the different developmental stages of Earth, showing plenty of fossils and dinosaur skeletons found in Catalonia and Europe. Hippos once roamed the plains of Barcelona 100,000 years ago! I wasn’t so keen on the taxidermy exhibition. Everything looked dead and well, lifeless. The precious mineral rocks fascinated me (jewellery!) as did the fungi and types of seed pods. It’s interactive enough to hold young kids attention as quite a few families cashed in on a rainy day activity. Or maybe they just like rocks, fossils and dinosaurs! 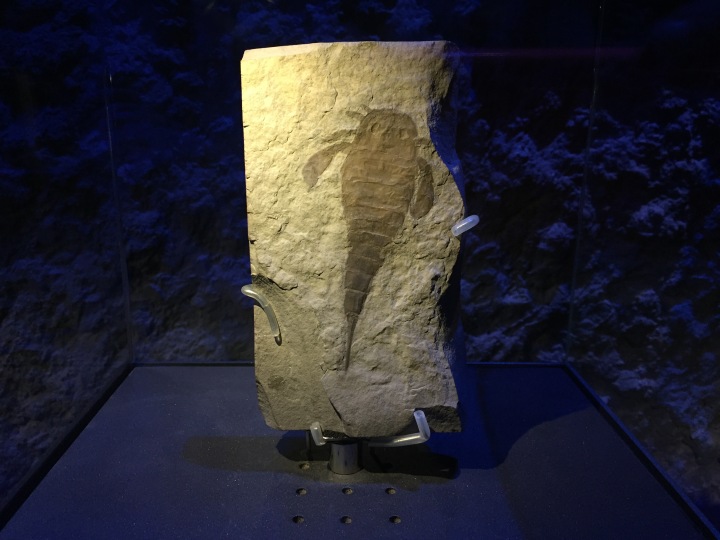 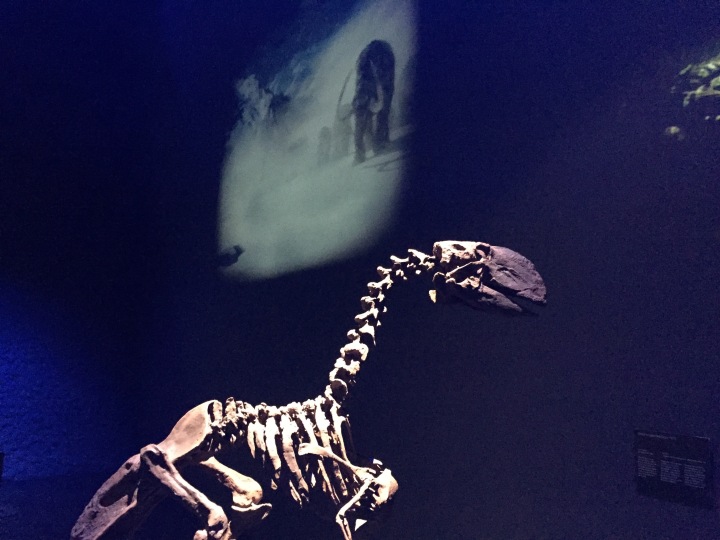 Have you watched Cosmos? Did it leave you in awe?

3 thoughts on “Cosmos and Museu Blau”