I was a happy camper at the gym yesterday. Normally at least twice I have to move my set up to accommodate the wannabe cross fitters (seriously, does the whole gym have to know you’re holding your barbell snatch? If you are going to let everyone know, at least add some more kilo’s to it. You know you can), or those oblivious that they might get whacked in the head.

I hear you rolling your eyes. ‘Come on! That’s nothing!’, but every time I go, I’m the who one moves, so others can get their workout in without interruption. Why move? Every trainer knows you need to hazardous free enviroment as possible to work in. That includes other gym users unaware of the concept of space. I’ve tried holding my ground, it’s too close for comfort. You give them an inch, they take a metre. So yesterday, I had nearly the free run of the ‘functional’ training zone. I don’t often rant here, but it’s been bugging me for a while. I should drop it, or maybe ‘drop’ 8kg on their foot. And while we’re at it, don’t get me started on those who leave barbells out on the floor and don’t put them or other material back. Not many people actually look they’re going or at the floor. Would they leave things strewn out at home? Probably.

Oh, ‘Tis the season for being thankful! Now that’s off my chest, now to what I really wanted to share. A lot of you know animal shelters have their work cut out for them. It’s hard emotional work. Some shelters in Ukraine volunteers (Harmony Fund) refuse to evacuate to look after the dogs and cats. There’s happiness when animals are adopted and despair when they don’t. I used to volunteer in an animal shelter and it was always the older and cabin fever dogs that got overlooked. Walkies time, they’re were completely different loving, fun beings, but how can you explain that, when it’s not visually apparent and they want puppy, kitten or French bulldog? Oh, I’m on one today! I would love to volunteer again, but (yep a but) the nearest is too far away at the moment. And this was meant to be light hearted today! Anyways, if you have a few mintues please check out these amazing animal rescue, charity and shelters:

Pittsburgh Aviation Animal Rescue Team. They take on board dogs, cats about to be euthanised in kill shelters, animals rescued from abusive situations or need urgent relocation to non kill shelters all over the USA.

Just one of many amazing animal rescues teams out there. Hope for Paws works in the Los Angeles area rescuing dogs and cats off the streets. Many are abandoned by owners and it’s these guys with hamburgers at the ready, go out there, catch them, fix them up and find homes. Some advice when watching their YouTube channel, have tissues on standby.

So many armed forces on tour even though it’s prohibited befriend and look after local dogs and cats. When the’s tours up, it’s hard to leave behind something that’s kept you going, comforted you in dark times. Run by a former British solider Nowzad based  in Afghanistan, helps reunited those furry creatures with their ‘humans’ back in the UK and USA. They also set up Afghanistan’s first official animal shelter in Kabul.

How can I not include one of the most infamous animal shelters out there! Battersea Dogs and Cats Home has been taking in and rehoming cats and dogs since 1860. Queen Victoria was it’s first royal patron and even Charles Dickens wrote about it. They now have 3 shelters located in London and South UK providing shelter to over 400 dogs and 250 cats at any one time. On average they take in 13 dogs and 8 cats every day. To run the shelter costs on average £18.4 million a year and they rely on donations alone!

The RSPCA, The Dogs Trust, Cats Protection, Guide Dogs, The Blue Cross, The Humane Society, their International counterparts, therapy dog and cat charities and organisations, all the local animal rescue and shelter organisations do such amazing work looking out and after the creatures we share our planet with. Winter’s a hard time for many shelters. They’re always in need of blankets, food, collars, lead/leashes. brushes, medicine, cat scratchers, volunteers, fundraisers, hay and boxes for abandoned guinea pigs, rabbits, mice and another animal they take in. So now’s the perfect time to donate some unwanted blankets!

Just over 9 years ago after we first moved to Spain, we (I) decided Mr AJ needed a friend. He was missing his next door neighbours cat he used to have nights out with. We went to what we thought was the local shelter and this little 1 year old wouldn’t leave me alone. He kept pawing at me, head butting me and when I scoped him up for hug, my fate was sealed. I became Diesel’s human. I’m mean can you resist that (insert awe, cutey voice) that littl’ face?! 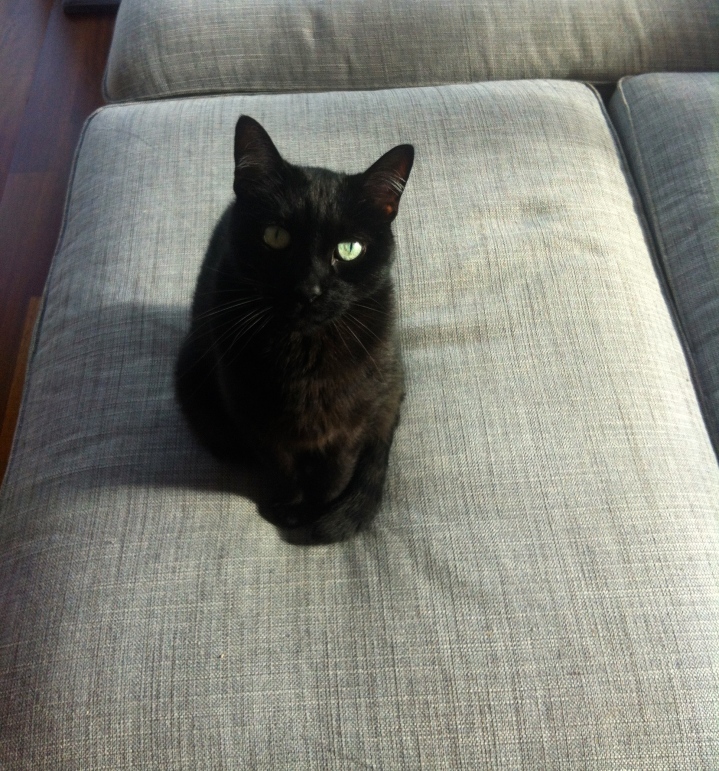 What’s your number one gym etiquette rule/no no? I’ll add no riding the bikes in just your swimming trucks/speedos. That was a sight I didn’t wish to see the other day. There wasn’t even a towel between the seat and those trunks. What animals organisations do you support? Adopt don’t buy!