Monday started off bright and early with no cats waking me up for breakfast. They were sound asleep sprawled out on the sofa!

After a total body strength circuit, it was time to find out the current status of my PT certificate. Still AWOL somewhere. I hope this week they at least send out my confirmation letter and it arrives soon, as I don’t want to take legal advice as I past the course in April and it’s now mid August.

After running some errands, I headed to the beach for siesta. There was a warning for a few jellyfish, but we were allowed in, so thought nothing off it. The sea was calm and I was enjoying treading water minding my own until one of the little ******* stung the back of my right knee! (Sorry little kids for the new colourful English words you learnt!). I’ve never been stung before and I had expected it to be more painful but I had an excuse to visit the lifeguards!!! 😉 I was shaking slightly, but I think this was due to the fact I’d been stung rather than the sting itself. So for the rest of the afternoon I had a nice welt across my leg and those that were swimming in that area didn’t get stung…ha! I’m taking Anti Bite with me from now on!

Jellyfish sting or not, I had a 6km evening run planned. My leg was feeling fine so I went. It was one of those every now and then great runs. There were quite a few guys out running, more than usual who I managed to over take, not that they were really pushing it. To keep them off, I ended up doing hill sprints and had a good fast average pace and left them standing! Though if they were to pick the pace up, I’d be way behind! Maybe the jellyfish gave me some extra pizzaz!

Tuesday’s workout took a little umpf to get going. I knew I’d feel better afterwards, so pushed through. Towards the end, my attention started to wander and I had to keep bringing myself back in the zone, otherwise it would have taken forever.

I was antsy the rest of the day doing chores, so decided to go trail biking in the park. My quads were screaming the second time around with the hills! I didn’t stop and just switched to higher gears. The runners weren’t too happy that they were sharing a trail with a biker. I find some runners very arrogant sometimes, especially in groups when they refuse to give way, even when it’s easier for them to do so. When I run, I’m always reading ahead and move when needed as it’s easier for me to do so rather than wait for someone else to decide. I understand all about times and keeping with the pack etc. I encounter this when I run too. Many times I move to run on the road as the pavement isn’t big enough and very few runners say thank you. Those that think ahead and run in the road before I decide, I always nod my head or smile. Is it me or do you find some running groups run you off the path?

The cicadas and dragon flies are still out and about. One of the smaller red dragonflies was happy to pose for a few minutes while I took a water break. 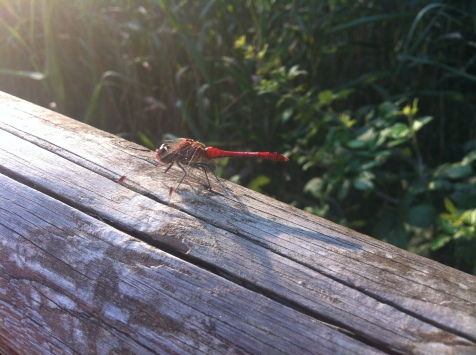 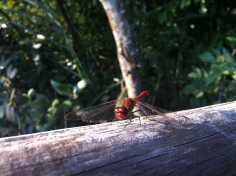 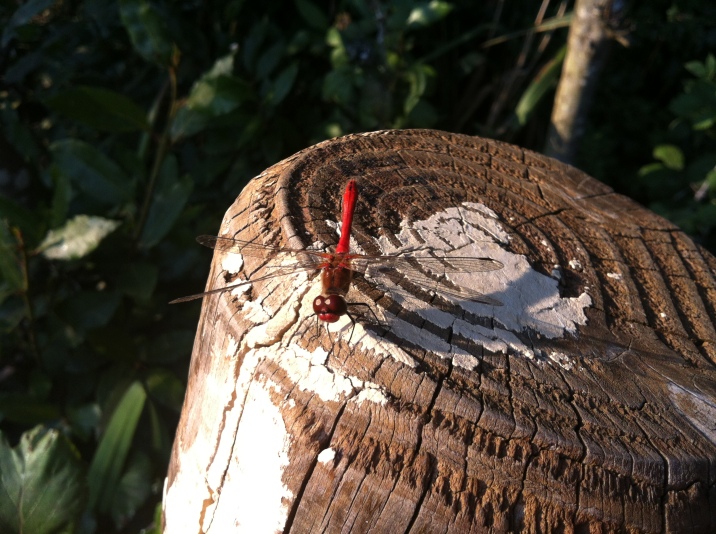 After all that, it was coconut water time to replenish and rebalance the electrolytes. I’m not that keen on the taste of coconut water and found the other day this tropical mix. It was a lot nicer with orange, mango and pineapple juice in. Unfortunately the price is too much to have it often, €3.75 for 330ml/11.2fl oz. Though Zico coconut water is gradually coming down in price in the supermarches.

Wednesday was a 8km run and box jumps. Despite being overcast it wasn’t any cooler and for some reason I kept freezing jumping on the higher wall. I was fine last week and today no amount of visilization, lower wall practice let me clear it or even jump! There were more people out than usual, so maybe I was slightly self-conscious. It was a different story with handstands…finally catching air and holding them even if it’s for two seconds!

Time now for some much needed yoga to balance out all the running, biking and lifting! Oh, and a hair masque and mani/pedicure to feel like a girl!