My other job is teaching English as a foreign language. In addition to learning grammar and vocabulary, I feel it’s important my students to learn a little of British culture and customs to understand the language better. It’ll help them if they wish to use English for travel and business in the UK. We’re generally a polite country (I know of no other country that apologies so much!) a nation of tea drinkers, love our food and gave the world James Bond and football.

Students are always surprised to learn that English isn’t one of the Romance language. It is in fact West Germanic brought over by the Saxons. When the French invaded Britain in 1066 French was the official language for 200 years, hence the French influence. Throw in Latin being the communal language in the middle ages and it’s easy to see where this misconception comes from!

While we’re on the subject of the French, they gave us the V sign. Well, we gave them the V sign or that’s when we started using it. It’s origins are unknown. Flicking the back of the hand forward, forefinger and index finger extended, thumb holding ring and little finger. (not to be confused with the peace sign!). Much how many countries express ‘2’. After the French left, we still continued to fight with them, this time on French soil. They detested our Longbows. So much that if they caught an English longbow archer, they’d chop off his arrow fingers (first and second fingers). The British soldiers, charming as we are (I say British as many longbow men were Welsh) would happily flick the French a big FU using these fingers. To this day, you’ll hardly ever see British gesture ‘2’ in this manner!

Why’s this important to my students? It has the same meaning as the middle finger in the USA! Granted we use the middle finger only more thanks to American movies and TV shows, the V sign’s still used widely today, not just in the UK, but Ireland, Australia and New Zealand. Don’t believe me? Check it out here.

To clear up confusion over, ‘wait that’s the peace sign!’ it depends which way the palm faces. FU is palm facing you, back of hand away. Peace as adopted by the peace movement in the 1960s is palm facing away, back of hand towards you. Winston Churchill used this way to express Victory in WW2. I laugh every time I see someone posing spreading peace, when instead they’re just throwing insults! As for ‘2’ gesture, I got over that a long time ago since living in Europe, but I still let my students know should they ever ask for 2 beers in an English pub and get a rather rude look back. 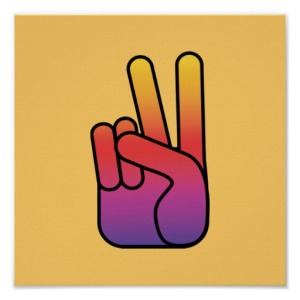 Back to being the nation of tea drinkers, we really do love our daily cuppa as shown in this years Visit Britan campaign.

Does you country have gestures that are used nowhere else in the world?!