Sunny skies for 7km in just a t-shirt and leggings. I’m looking forward to short and tank top running season coming up. It’s still a tad too chilly for me to bust them out just yet. Plus my legs need some colour. I ran later than scheduled so the path was quite busy with walkers and a few runners. If I can, I smile, though I rarely get a smile back. Today, 2 smiles, an old guy who I see sometimes see running and an older lady walking, who gave me the biggest smile, cheering me on! I needed that boost as at that point my legs felt like lead!

I had a podiatrist check up who I very nearly hugged out of sheer excitement I can wear sandals. To say I love sandals is an understatement. I really thought with the insoles I’d be stuck with trainers and plimsoles all year round. She can for €10 a pair stick pads on the soles. I can’t wear flip-flops any more, all sandals have to have an ankle strap, but I don’t care, I can wear sandals this year! I’ll no doubt have to wear trainers/plimsoles shopping, running errands, as full insoles give better support, but I don’t care. I can wear sandals. Not that I need an excuse, well, I do, a good one, a legit one. I’m sandal shopping this weekend.

Good news need a celebratory treat. Sandal window shopping and pink peonies, which Diesel’s already chewed waking me up wanting breakfast. I got another surprise later. Someone covered Pauls watch! There went my girlie TV night! Love ya really!

I have my eye on the black pair.

This morning I tried a different style circuit. I split my workout into 3 separate circuits (4 moves, split between upper and lower, 3 sets 10 reps) with emphasis on back and hamstrings, trying a few new moves from a few Shape magazines that were on my when stronger recovery list. It was refreshing and energising to switch it up!

Most of the afternoon I spent waiting. I met a friend for coffee. We had to postpone the time as she missed the bus from University (she studying for her Masters and is one very clever lady)!  While I waited, I decided to get some groceries I can only get in Antibes centre. I ended up being late to meet her! We had 30 minutes of catch up before I had to high tail it home to take AJ to the vets. No bike ride today, firstly due to 47kmph winds and a puncture from yesterday. The waves crashing around the castle would have been specatular, however no bike and time, meant I couldn’t go. Instead I watched the waves crash along the sea wall. That sea wall is tough! Built in 1700 something. 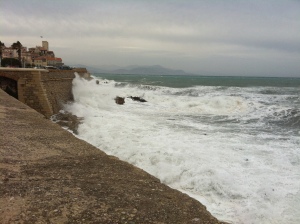 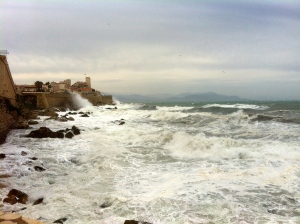 Paul was running late. I called the vets to say we’d be about 15 minutes late. Err, an hour late. Paul got stuck in traffic coming, then we got stuck in traffic going. We finally made it, to wait 45 minutes. Bad news for Mr AJ. His left eye now has the same problem as his right earlier this year. He’s back to 3 drops, 3 times a day. His teeth need cleaning too. Before he can go under for pearly whites, he has to have an echograph done to check his heart’s okay. I received a heartbreaking message this week, that 2 of his brothers passed away this year from heart problems. The vet wants to make sure his heart’s in perfect working order before going under for his teeth clean. Fingers crossed for Mr AJ!

Do you have days of running around but getting little done?!