Back in July which seems like a lifetime ago, we bundled the cats up in the car and headed down south to the Costa Blanca for a week. Everything was last minute. The only plans made were to be outside as much as possible soaking up the warm sunshine and warm sea. 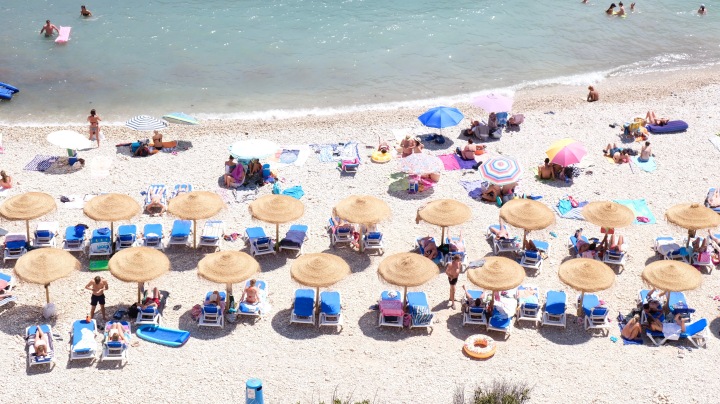 While Googling Imaging Spanish coasts verses where still have rooms available, Calpe kept coming up. Located just under a cap (Cape Nao) I was yes!, I bet it’s full of coves to explore. By boat only. We, okay I, didn’t always get up and running in time to explore by boat .Where we were staying was so quiet and peaceful I wanted to soak it up before heading back to Barcelona. Recommended places to visit was when booking was Granadella Beach. On the Monday we decided to head there. 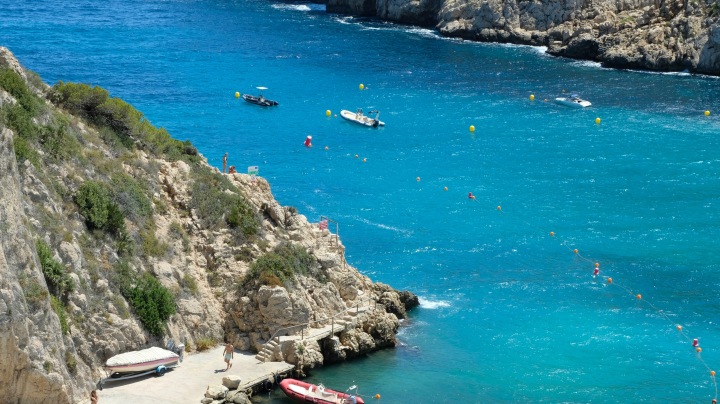 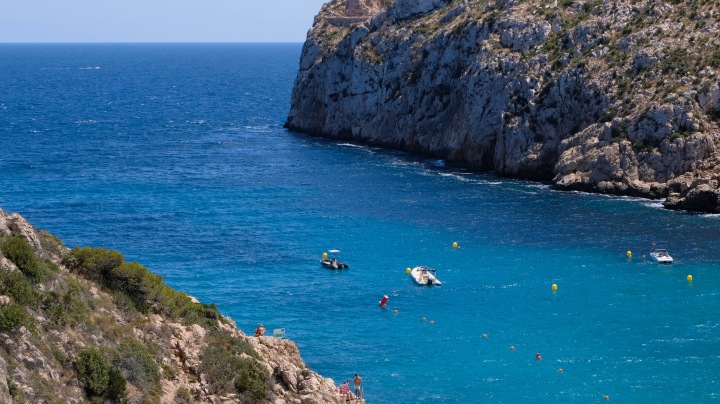 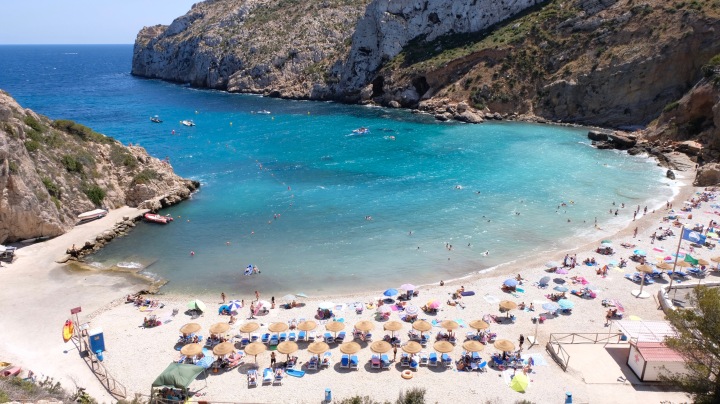 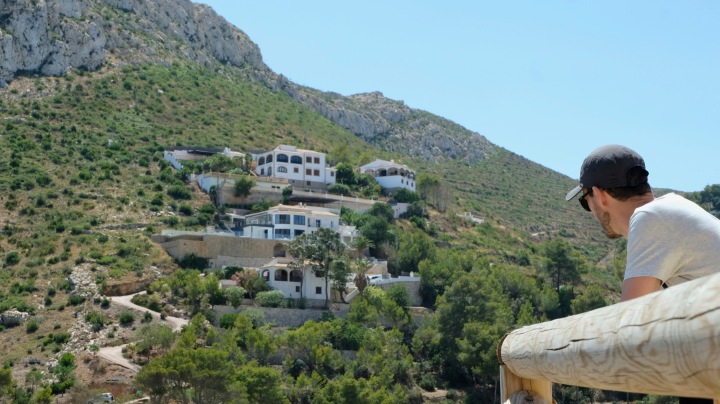 Driving though I cap I kept thinking how much it was like the South of France. All the houses were similar style, add windy roads and if it wasn’t for road signs in Spanish and Valencian it’s easy to see how. When we hit the sign post for Playa de la Granadella, in the opposite direction was sign post for Cala Granadella. Cove won without contest. We tried looking for the beach later that day and never found it even with GPS, so maybe the cove was where we were meant to be that day. 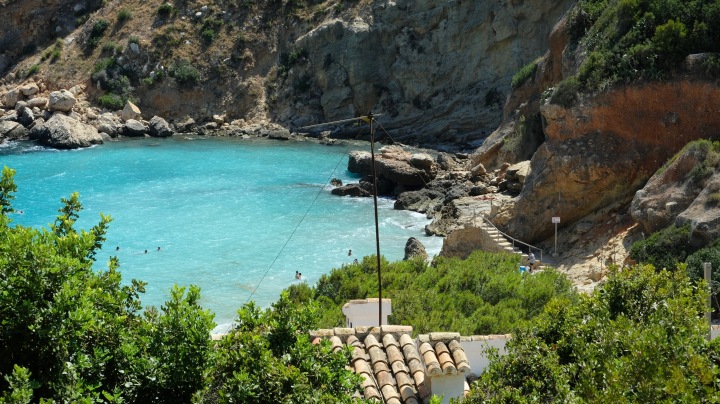 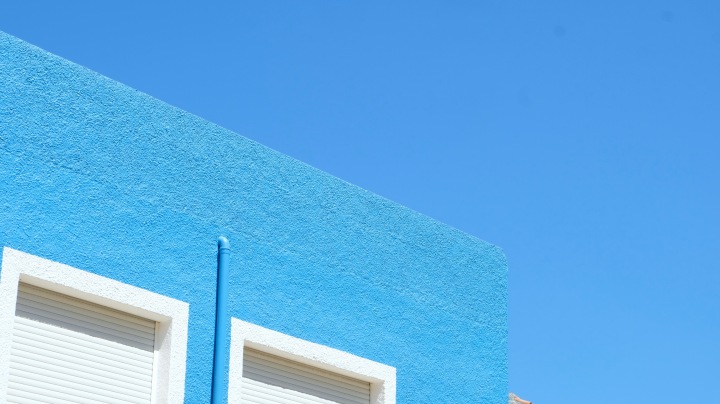 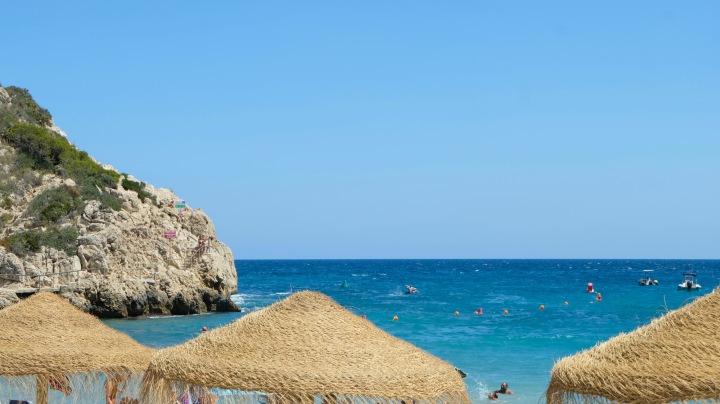 There’s only one road to the cove so you can’t miss it. One road in and one road out looping. To leave you continue along same road as you drive through the car park. Even though it’s quite away from the main road almost in the middle of nowhere it’s popular. So popular there are attendants. Well, I think they were or they could have been monitors. Nearing the cove near some gates there’s one in a orange bib waving you through, then one near the carpark. Parking’s free. The car park overlooking the cove was packed so be prepared for a short hill walk down. We took the long way following the road though you can cut through by the restaurants which we did leaving. Looking down the beach is misleading. The light reflected sand, in reality it’s a pebble beach. Back in France I got used to walking barefoot on the smooth pebble rocks so I was no worries I got this. Nope. Those pebbles bit and stung! I think most beaches on the cap are pebbles with further south sandy. We both got jealous of people wearing rock swimming shoes or jelly shoes. But then it would have freaked me out swimming in them. Lightweight! 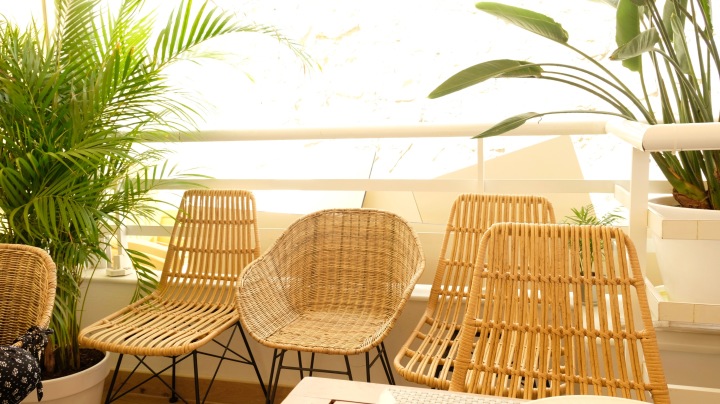 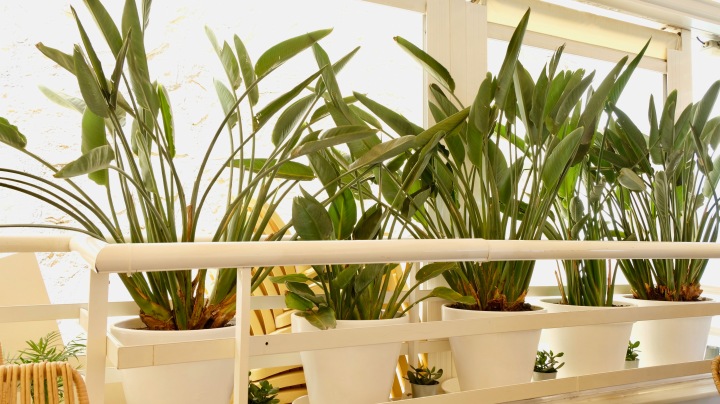 Before hitting the beach we had lunch at one of the packed restaurants there. I forget the name, but they are super accommodating for veggies and vegans despite being a seafood place with a huge salad on the menu. It was the one at the bottom of the steps cutting though to the car park. I think they did veggie approved pasta. We sat outside on the shady terrace enjoying the warm sea breeze before hitting the beach! 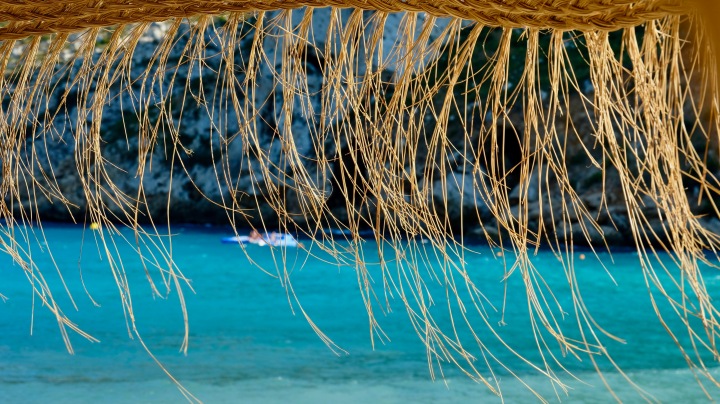 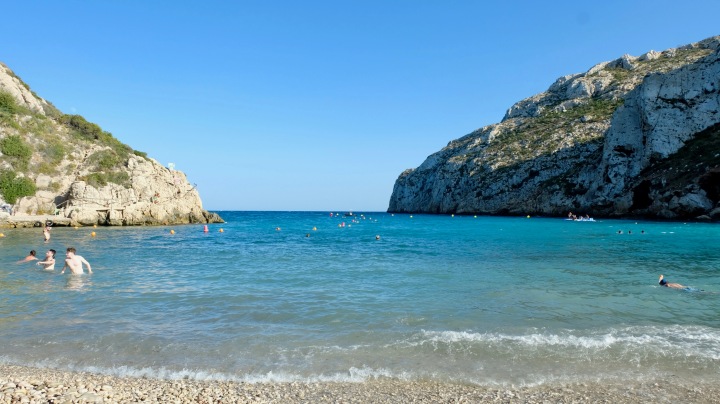 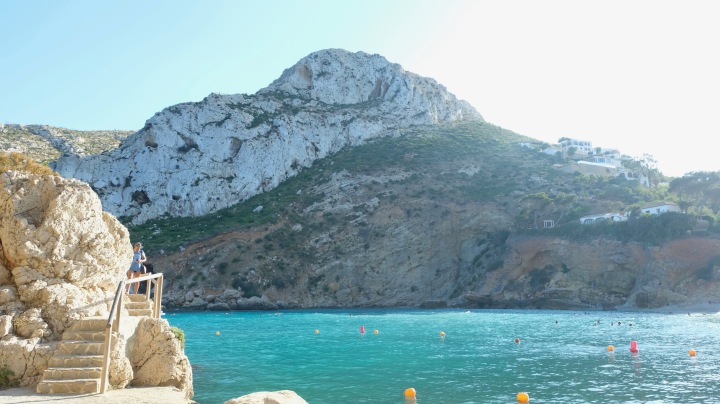 We hired sun loungers as a treat as neither of us wanted to deal with pebbles digging in (honestly they were as comfy as the pebbles. My back always hurts when I use my gym ones. These were no different lying on my tummy). For the next 2 hours or so we soaked the late afternoon sun, reading and the warm, super warm water. That water! Though the cove’s sheltered, the wind was whipping up a few waves. Showers you pay for however as we hired loungers they were included. The sun lounger man also operates the shower tap. Cruz Roja are the life guards. 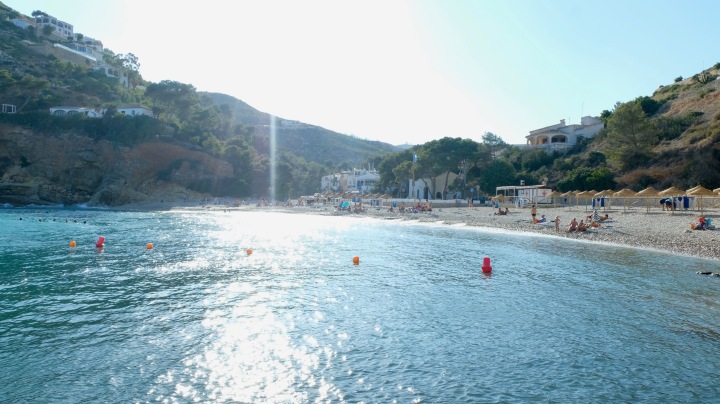 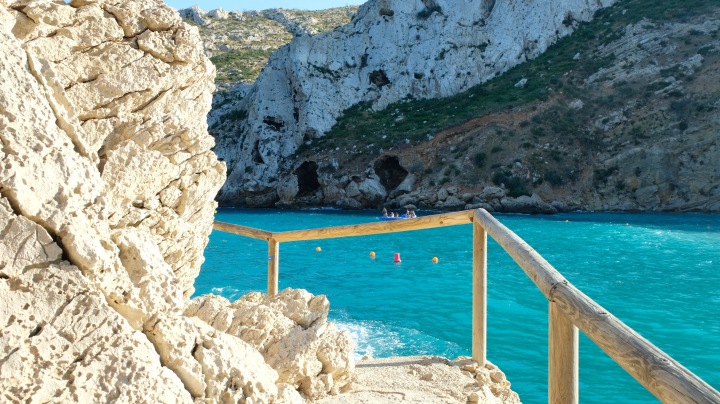 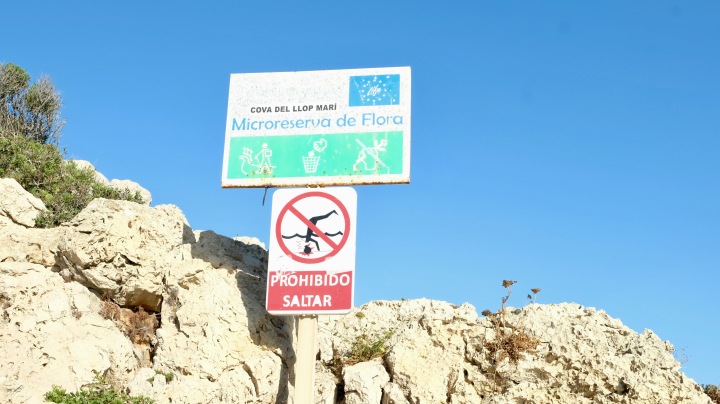 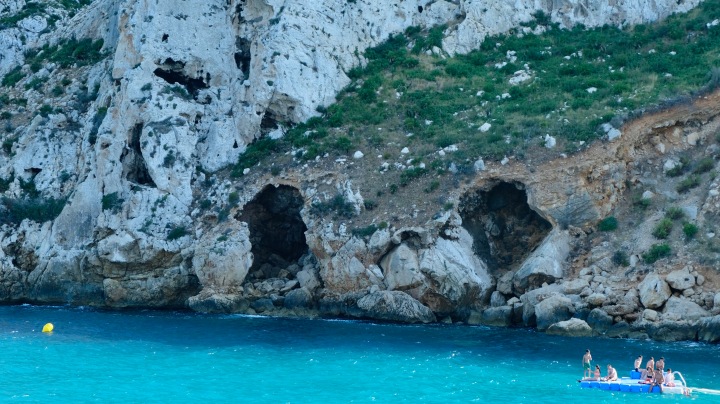 Kicked off the loungers around 6.30pm we hang around to explore the cove a little. We thought the rock path would continue around the cove for a bit, but it’s only a 10 meter walk. And is the Instagram corner, so be prepared to wait! Though the whole place is Instagramable. With hungry tummies again we made our away back to the car to try and find La Granadella beach for a cup of tea/coffee and snack. Which we never did, because after Googling for this post, we’d been there all along! Duh! However I’m still not convinced. That sign post definitely pointed in opposite directions to the beach and cove! 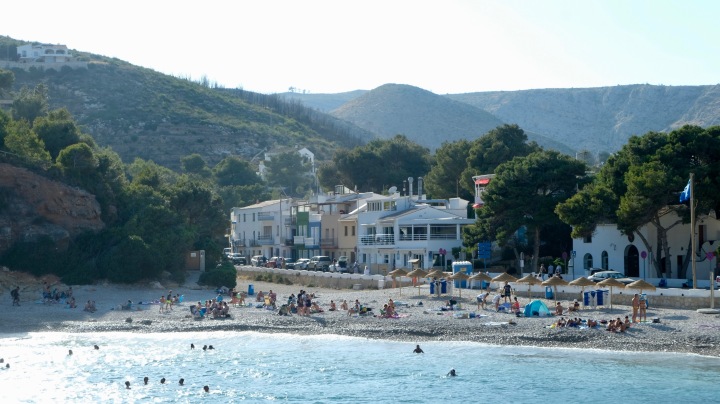 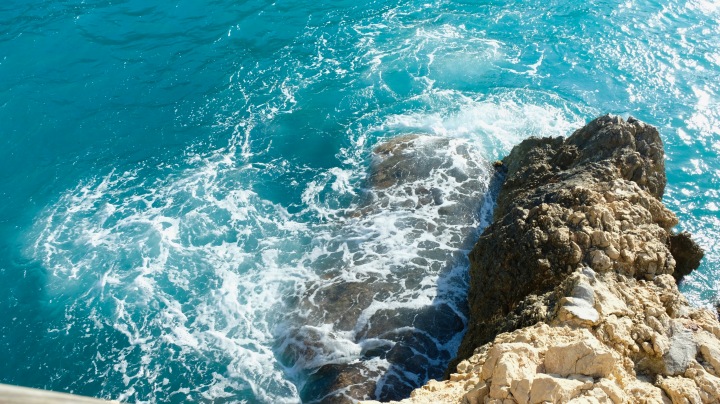 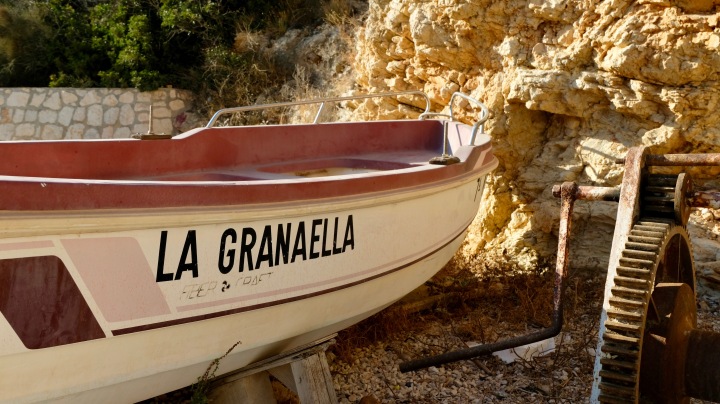 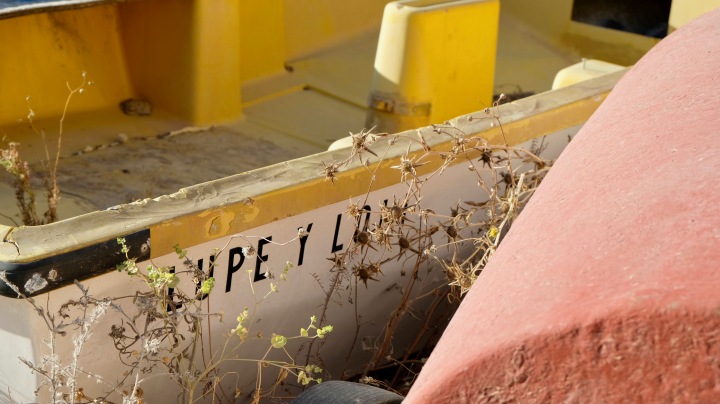 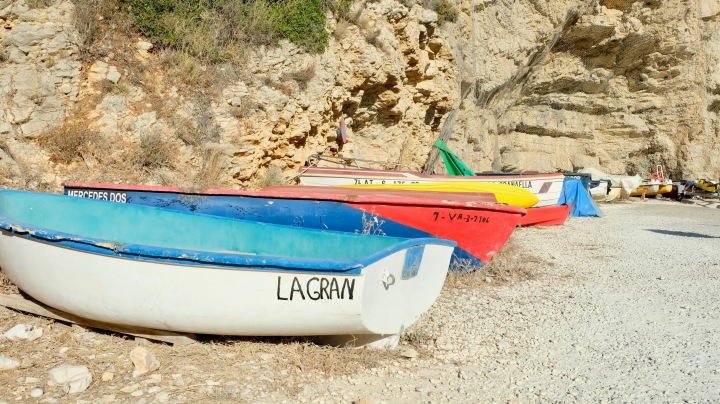 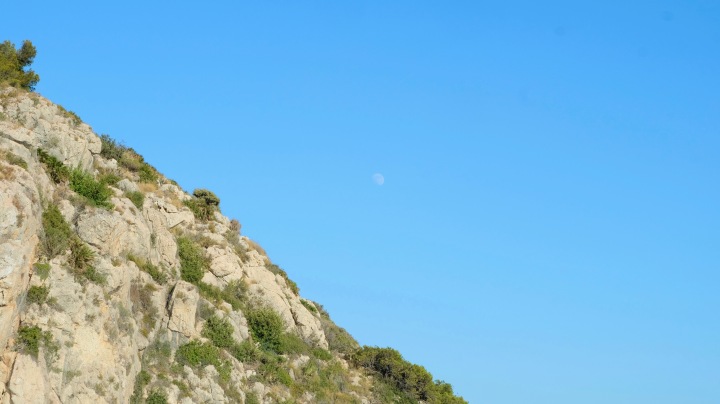 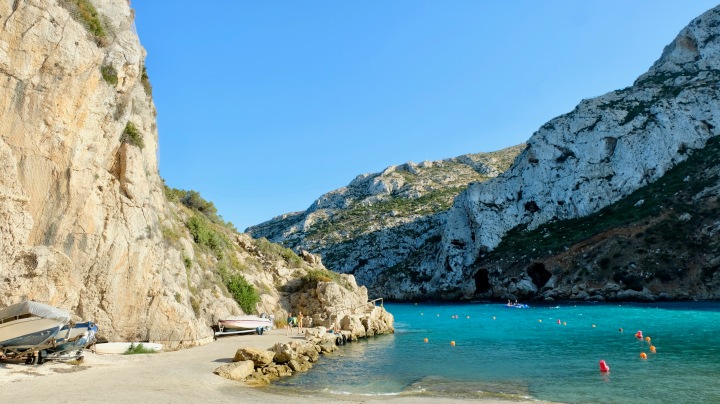