Not quite sure what’s happened to time this week. It was Monday and now it’s Saturday! Time flies when you’re having fun. Not sure about the fun element, but it’s flown! 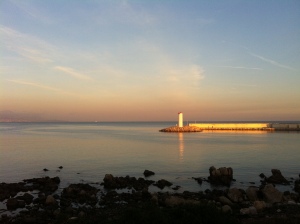 Home alone on Monday as Paul was on watch. My workout on paper looked good. Half way through I got bored and it dragged on longer than it should have. I saw it through, but didn’t really enjoy it. Sometimes that just how it goes!

The rest of the day got better and I finally managed to catch on some TV shows and the finishing touches to Christmas presents this year. I may have got a little excited with the sparkly rhinestones!

Tuesdays workout made up for Mondays. Total body strength circuit, that got my metabolism fired for the day and destroyed my training gloves! A mix of everything for 3 rounds resting 15-30 seconds between each set. I followed this workout with a plank based abs circuit.

(Disclaimer: Though I am a certified Personal Trainer, this workout may not be for you.)

This is what 10 months of lifting, burpees and planks does!

I managed to squeeze in a bike before work and the sun was actually shining! Recently I’ve been coming back from my rides in the dark so it was refreshing to see places day light. Roll on December  22nd when the days start to get longer!

Paul motorbike chauffeured me from work. Motorbikes are the best way to travel in rush hour, especially in Europe where bikes can filter through traffic. There’s quite a bit of respect for bikers in France. Cars will pull over so you can over take (thanked by sticking out your right leg, or in my case, sticking my right hand out) or get past in traffic. Even when it’s cold I’m sure those stuck in cars are envious of bikes weaving in and out, getting home quicker, albeit colder! 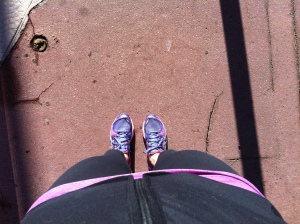 I set out to do 9km and ended up doing 10km! The sun was shining, ankle and knee okay, so I just went for it. I kept the pace steady and surprised myself for having a quicker pace than before I was injured! 10km’s my max, so I won’t be pushing to go further. Both the knee and ankle protested in the evening, but I’d expected that. I have another Osteopath visit shortly, and am hoping that things have just got a little tight, which is what causing the protests. I’ve been hesitant to foam roll as I don’t want to press the calf/Achilles in a manner that put backs recovery. As I’d ran 10km, I foamed rolled and massaged cautiously. I’m still walking!

Diesel likes to follow the sun and one of his favourite spots is down the side of the fridge (it’s an old appartment that more than needs doing up, but for now the price is right until we find somewhere of our own). There’s nothing he likes more than sunbathing! A true Catalan cat!

AJ prefers to soak up the afternoon sun.

A trip to the doctors confirmed my eczema and now have prescription strength glycerin lotion and as it’s severe, steroid cream. I’m not a fan of prescription medicine mainly due to it’s testing. After sitting on the bathroom floor with a mix of Greek yoghurt and honey on my back the night before I realised I had to go as it’s not fair on Paul to hear me say it hurts every 5 minutes and scratching like a flea ridden cat! I put olive oil after showering and said if it’s bad tomorrow I’ll go. Both remedies helped no end, but it was only temporary, so I had to go in. The steroid cream I’m using very sparingly and the glycerin lotion has done wonders! I haven’t wanted to rip my skin off! In 3 days of application it’s gone down and doesn’t itch. I’ve decided that when it’s eased up, try natural remedies to keep on top of it. I changed laundry detergent recently and that’s going out along my shower gel, eco floor cleaner and Palmers cocoa butter. One of them caused it and also Aj’s allergies to come out. What a pair we are! TMI I know!

It turned out to be a busy day but I managed to sneak out for fresh air with a quick bike through the port.

Place de Charles du Gaulle light up after after shopping for dinner which was a quick and easy salad for me and already in the fridge chilli for Paul.

Travelling means he has to stock to boat fridge of ready meals for the crew. Yep, on a jet plane again!

(Yes, it’s the wee hours of Saturday morning and I’m writing about Monday to Wednesday. That’s how it goes travelling!)

Are you for western medicine or prefer a more holistic approach? Does your attitude to food influence this? As a vegetarian nearly vegan, I don’t like to have medicine as tested on animals, which is why I eat healthily not to be sick that often and require it. Though what happens when you’re really, really sick and need the strong stuff……..?