Mid week already? Time flies, fun regardless. I remember as a kid, I wanted time to speed up so I could be older and be independent. Now I want more hours in the day. The getting older bit’s scary. Not necessarily the things you learn, I won’t say wisdom, firstly as that sounds old and secondly getting older doesn’t give necessarily give you wisdom (I won’t name names) but how our bodies age. In a cruel twist of being top of the food chain, we’re also one of the few species that appear to visually age, past the cute stage. Nature likes to play games! I think that’s why cats were so revered in ancient Egypt. Unless it’s an really elderly cat, it’s hard to guess how old they are. Forever young, immortal.

I hope you had a good weekend! I had unexpected company. P’s boat docked Friday and Saturday to escape the bad weather at sea (it was still warm and sunny, but windy), hence no Friday Favourites. Plus I had my first beer since the New Year at dinner and after the 2nd, I was okay cycling home, had to take corners easy and fell asleep watching TV. Lightweight. With only 3 hours sleep I missed my 5am alarm for Roxy’s #runsupyoga, but somehow just just made it in time. I wasn’t the last, so that made me feel better.

Yoga on the beach

One of four events this Spring/Summer, here in Barcelona, Oahu Hawaii, Sydney Australia and Marseille France, Roxy’s holding women’s only yoga, 5-6km run and 2km SUP (stand up paddle boarding) race event. You can pick and choose which event/s and the yoga’s free. I’m almost sure that most of the participants may have had other motives than just a yoga class and participate in a race. Free yoga class on the beach and a free towel, then depending on which event you chose afterwards (not free), drawstring rucksack, Roxy trucker hat and SUP rashie. Roxy, I’m sure wants to promote their fitness line. Judging by how expensive the line is, maybe the participants got the better deal. I may have thought signing up about the goodie bag before what I have to do for the goodie bag. No shame. I saw a few girls like girl behind me who soon as the yoga finished grabbed all the spare towels around her. Maybe 1 towel per 10 minute wait was their reasoning. 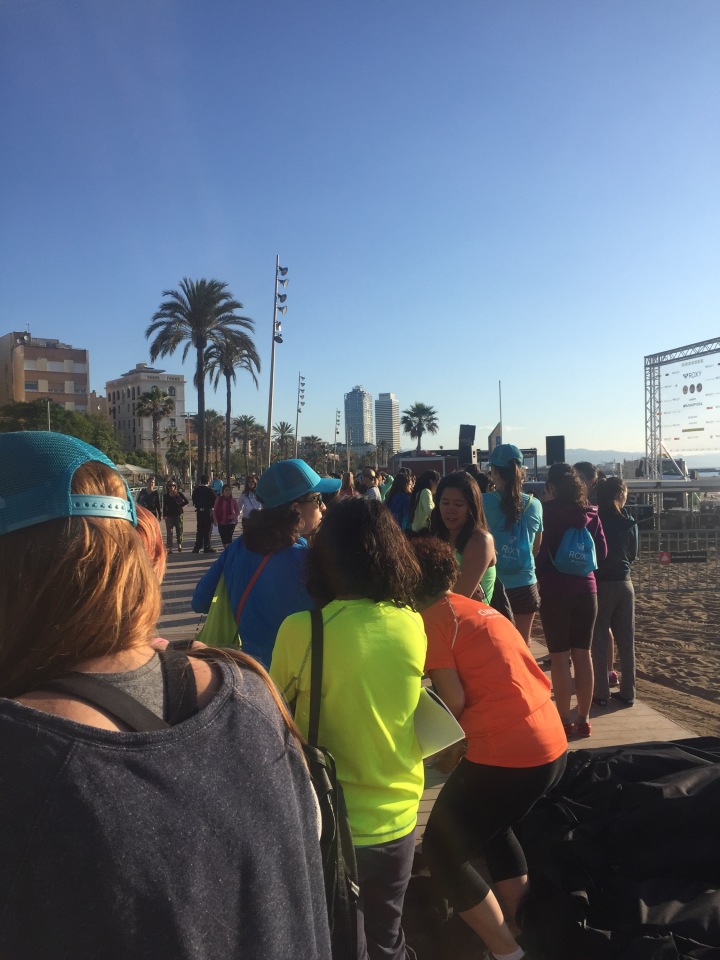 To ensure you got a good spot on the beach, it was recommended to arrive at 7.30am for a 8am start with not entry after 8am so you have plenty of time to drop of bags, bathroom etc. I arrived at 7.55am (I missed my alarm) after a sprint cycle ride and girls were still arriving, 10, 15 minutes later. Spain, that’s early! Unfortunelty we were kept queuing in the hot sun for 40 minutes with no explanation. There was a helicopter flying overhead and when we were finally allowed in the beach (after being told, ‘hurry girls’. Eh, you’ve kept us waiting!) I thought from how the towels were laid out, maybe Roxy is spelt out to see from the air. I was nearly right, the Roxy emblem. Pretty impressive, however if we’d had been told the deal, while waiting 40 minutes in the hot sun, I’m sure they wouldn’t have had so many complaints. If you know what’s up, you’re more understanding or not. I felt a little sorry for the girls who only signed up for , the free yoga as it was a 20 minutes class instead of 45, bend and stretch, y esta?, I’m still stiff at the end. What was meant to be a 30 minute transition for the 9.15am 6km, a 15 minute dash to cloakroom, toilets, wrestle with suncream or in my case the gym as it was next door. Let’s just say, I’d be cr*p in triathlon transition times.

The race was fun. Hard, as I hadn’t had much water (queuing for yoga, I needed the bathroom, but didn’t know if to go or not, if the class started), didn’t bring my running bottle and somehow managed to get the same song on repeat the entire run. Final position, 80th out of 755 ladies. I just wanted it over for water! P came to cheer me on and be official photographer. Thank you! SUP I didn’t sign up for, didn’t hang around to watch and instead had a trip around P’s new boat, then slept of the early start with a sun siesta. I can’t say the afternoon and evening was as exciting. Allergies and bad headache, almost migraine from the sun and dehydration, meant I slept the afternoon when we got back. The only way I know how to fight migraines is a cool room, no bright lights and sleep. We did make it just before Apple closed to look at new laptops for me. Mine’s playing up something and a little play on roulette. Didn’t win this time, however I made the money back on the 50 cent machines that pushes off/sweeps stacked 50 cents off a shelf to win (dunno what’s called. Penny machines? That’s what we call them in the UK) only to loose it all trying for more 50 cents! It’s that sound of falling money. You want more.

Sunday, P got called back early to the boat just as we were about to leave to explore the labyrinth. Everything back to normal. Workout, sign up for more races, beach and zoo! Can’t show off zoo photos or better Roxy day photos as there’s no space on iPhoto to import. I never had this trouble before the recent iPhoto update. Genius bar’s booked to sort out my ageing mac. That’s another thing that visually ages. Technology. I still remember dial up telephones and when we got our first cordless phone! That was a revolution unless, like my Dad, you forgot to place it back in the cradle to recharge. Or misplaced it. No names, Dad. 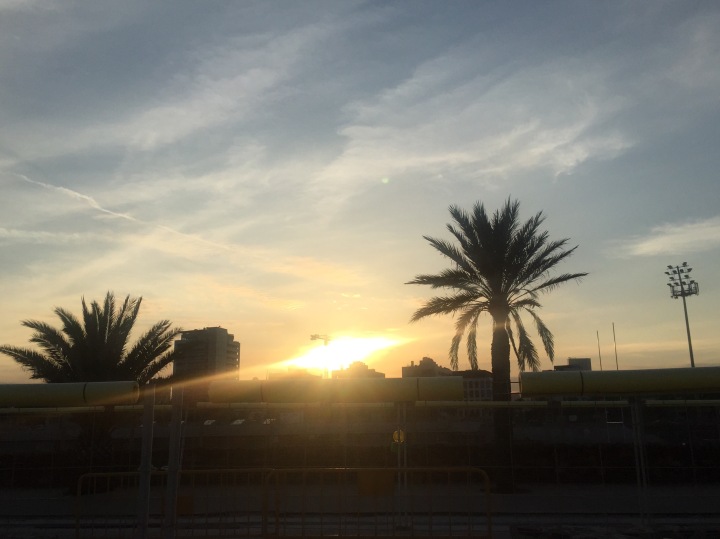 Have you ever signed up for a race or event just for the goodie bag? What races have you signed up for in the next few months? I’ve got 3 10km’s coming up all within 2 weeks of each other!